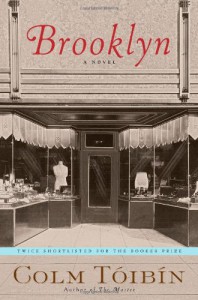 Brooklyn garners a quiet kind of appreciation for its most powerful and subtle aspects.           Character development stands out among them all, as Eilis changes through moments of life that never find themselves bogged down in drama or excessive artificial tension. With a few exceptions, the supporting characters are all realistic people, and they make real choices, all of which have such profound yet apparently minor consequences that you'd almost miss them all if you hadn't taken a second look.

Really, all that's happening is a brief period in a young woman's life, but Colm Tóibín wields the tools of storytelling nevertheless---backing Eilis into corners of circumstance until her hand is forced and she evolves a sense of decisiveness.

The whole thing also takes place in the fifties, and is commendably comfortable with its time. In a historical novel, there must always be an awareness made of the attitudes and customs of the era. In the hypothetical, it shouldn’t be so difficult for Eilis to detach herself from the attitudes of other people, nor should half the things she worries about be so pressing, but even as a modern writer, Tóibín never pulls the rug out from under her, and never adds commentary of 1952, instead just painting a portrait and letting it speak for itself. Eilis is a heroine living in her time, rather than ahead of it. The setting clearly benefits.

Neither sentimental nor clinically described is the titular Brooklyn, painted in realism above all else. Somehow, with just a few settings---the boarding house, Bartocci's, the college, and a few dances and visits in-between, Tóibín fleshes out a New York none of us will ever know, no frills or long walks of lush descriptions required. We experience a little reality built around one person, in the places Eilis carves out for herself, so perfectly fitted and grounded in normalcy that it becomes just as worthy of longing as Eilis' home in Enniscorthy.

And Tóibín's portrayal of Enniscorthy shows how a small, tight-knit town can be both comforting and paralyzing. An unmistakable sense of home is there, but so, too, are the caring neighbors and relatives, and questions of "When are you getting married?" and "What about your poor mother?" He makes foils out of places, is what I’m saying: where the contrasts and comforts are so acutely different from each other that it could only be an immigrant’s eyes that see them.

The story does, however, fall a bit flat near the end. The sequence is presented as a challenge to Eilis' decision to live in Brooklyn, the introduction of a chance that she could go back to Ireland and stay there, but in truth, the length of acts matters, and Part Four, with its meager fifty-four pages, ends up displaying inadequate stakes and threatening an outcome still far outside the range of possibility. It becomes more of a brief obstacle stuck in the middle of an inevitable path than anything else. Paradoxically, all of Eilis' thoughts and actions make perfect sense: it's simply the circumstances and the venue for those choices that seems to almost make them for her.