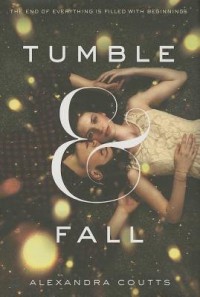 For all the trouble I've had accepting the inevitability of my own demise, It's kind of a miracle that I can read a pre-apocalyptic novel like Tumble & fall without getting sick to my stomach.

Well, regarding the premise, anyway.

Lots of novels have a main goal of being big-presenting expansive ideas and extraordinary characters and a grand epiphanies--which, ironically enough, turns out to be where most fall short.

Tumble & Fall, the tale of life leading up to a deathly asteroid strike, is no exception. Granted, it does indeed provide a window through which to see the stories of everyday people both leading up to a cosmically explosive end and surprisingly business as usual. But that idea gives merits that the story falls short of.

Coutt's story hardly fails in making its obvious message of making the most of the time you have before it's too late, citing meticulously planned and possibly even contrived examples of turning points in character's lives before the big end.

It's a rather tricky notion that the book's ending is apparent even as the reader turns the first page. Making such a novel suspenseful isn't impossible, but it's challenging, proven by the fact that Tumble & Fall fails to provide much noticeable suspense or anticipation in between its pages. In short, it's still irrelevant to me that the apocalypse waits for the characters. I just don't care and Coutts never succeeded in fixing that.

In addition, when themes are too exhausted in a novel, that may I remind you, is not solely supposed to be an allegory, they become old news. At the beginning of the book, the message was perfect. But as the plot drew on and Coutts ran out of subject matter, it lost its significance.

A novel about the end of life as we know it started to sound like a fifth grader's theme essay.

The characters, on the other hand, never seemed to have potential in the first place. They didn't really have to have personalities of their own, all acting unconsciously on Teen Angst and end-of-world melancholy.

And though some elements of Sienna's and Zan's storylines had merit, Caden's seemed like a total derail from any hope of a significant story at all. It was not only boring and uncompelling, but nonsensical and lacking thought. (Save for the current restatement of the theme, of course, in blatant and simple form.)

The random insertion of romance, in all the storylines, was absolutely absurd. Not only was it unforeshadowed and un-called for, but it was sickening, distracting, and well deserving of the title, 'stupid.'

Though this book's lack of any artistic agency makes it easy to understand, it is by no means readable. The story, unengaging and about 20% irrelevant due to romance, goes around in circles and seems to drag on forever, putting even the most determined readers such as myself in a slump and temporary disillusionment for reading things at large.

And yet, I pulled myself to finish it, looking for redemption in the last chapters of the novel, and the only real joy I seemed to find was the joy of having this flop of a novel be over. I remain reluctant to even give it credit for the good things from the beginning.

All in all, not worth a read. Tumble and Fall invites readerly sluggishness not unlike the feeling of unwillingness infamous for pulling artists to lay in bed for days.

In fact, I'd chose the asteroid over rereading this.