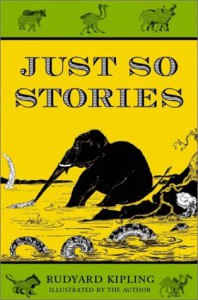 Any story coming from the early 1900's is bound to be, at the very least, problematic. As a reader of classic stuff, I just knew that going in. That being said, I also thing it's worth it to allow outdated books to be outdated. Enjoy what you can, be mindful of how old it is, and be glad people no longer think that way.

Despite the fact that his literature shows twinges of imperialism in coming from an Imperialist time, Rudyard Kipling is a classic author, and his works are still being read in a world that could have just as easily moved on from them.

Kipling's writing itself is good. It's whimsical, it's silly, it's odd in a way that's very pleasing to read, and that's coming from a lingual purist. You can tell he's writing for the target age group of toddler in the way that he tells the most nonsensical of stories.

I actually find it funny that Just So Stories finds its place as a staple of classic works -- a shelf that is very usual in the adult section of all your bookstores and libraries. (Though it might be a good thing that a book that uses slurs in the old fashioned sense isn't how kids learn words anymore.)

Reading works meant for young children, though, and reflecting on them like you think about adult books is truly an interesting process.

One key thing I noticed was an absence of any theme. We end up finding them in most of the books we read even as a kid, and sometimes we don't think twice about them being there. But I was actually quite shocked to find that these stories don't really have a point. They just sort of exist.

They exist for us all to laugh and and think silly, they exist for the playfulness of rhyme and alliteration, acting like poetry when it's really prose.

Despite what I personally think most stories should have, having stories that exist only to entertain is a nice break in the endless grind of books that try to mean something and fail---or worse, that mean something and then lose it after it is unknowingly edited into oblivion.

I'm not saying this works for everything, but maybe stories written for amusement are just what hard-liner "what's the point" critics like myself might need.

At any rate, Kipling's Just So Stories is short, simple, and readable, the very thing for people that want to read but give their minds a rest at the same time.

Give it a shot! (especially if you just read Common Sense and you're mcfreakin' losing it.)